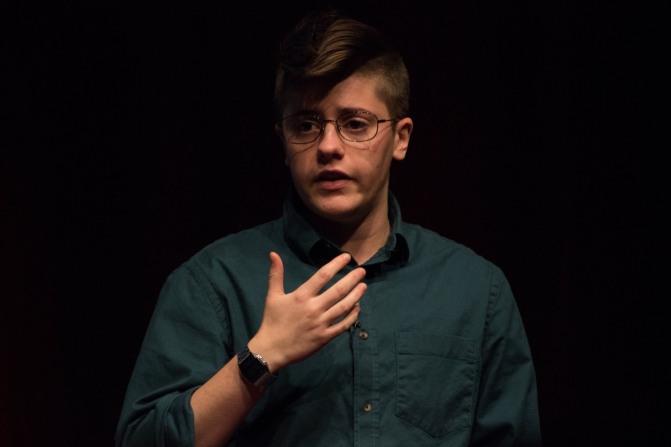 Maddie (she / her, 19) was–as far as we know–the original person to whom our body belonged, and the one who experienced sexual abuse as a child. She developed DID as a result of that trauma, and remained the host until June 2016. At that point, having just escaped an abusive relationship, she retired as the host. She is essentially in a state of hibernation and fronts only on rare occasion.

Roswell (they / them, 23) is the current host of the system (as of June 2016). They formed as an alter around 2015 while Maddie was still involved with her abusive girlfriend, and took over as the host when Maddie retired. Ros is the only alter who identifies as transgender. They are the one professionally diagnosed with DID and PTSD.

Mal (they / them, age unknown) was one of the first two alters to form in response to the initial childhood trauma Maddie endured, and serves as a protector figure for the system. In times of crisis, or when the host is in danger, Mal automatically switches to front. Mal is a trauma holder; they hold onto repressed memories of the initial trauma in order to protect the host(s).

Percy (he / him, 7-8) is the other alter formed in response to Maddie’s initial childhood trauma.

Fox (he / him, ~30) is one of the alters who fronts most regularly after Roswell, with whom he’s especially close. He’s an introject–an alter with memories of a full life lived prior to ending up in the system.

Steve (he / him, ~30) is an introject. He doesn’t front often; generally when he does step in, it’s for peacekeeping in confrontations Roswell doesn’t feel able to handle themself.

Sawyer (she / her, late 20s) is an introject, and she is particularly close to and protective of Roswell. She didn’t form as a protective alter per se, but has assumed that role over time, and serves as a mentor figure to Roswell.

Bucky (he / him, ~30) is an introject. He, Fox, and Roswell are the alters who struggle most with their PTSD.

9 (she / her, early 20s) had been around as a fragment for a couple of years, and settled in as a fully-fledged alter early February 2019. We don’t know much about her role yet; she’s not a protector necessarily, but has filled that role when needed. She’s perhaps the most outwardly social of any of us. She’s also the designated bug-killer when everyone else is being a wimp about it.

Silas (he / him, ~25) is a bit of a mystery in that we don’t know how long he’s been around, but we first formally met him in December 2019. He’s a partial introject in that he has some memories of people and events he doesn’t know here, but in a much fuzzier way than the other introjects. We’re not sure what role he serves exactly, but he’s a very comforting presence.